I spent quite a long time with year 3 passing around multiple claps around a circle. We got a socratic circle thing going with a couple of kids stood in the circle following the claps round, noting strategies that seemed to work and identifying behaviours associated with dropping the claps. Hearing the kids report back was much more powerful than me giving feedback. The children then discussed the different emotions they felt doing this activity. Many of them mentioned anxiety, nervousness, joy,when it had gone well, tension and the feeling you couldn’t relax for a minute. The children discussed the feedback given by children and everyone agreed an individual strategy for improving their own performance. Main ideas were letting go of the clap once you had passed it on and looking back in the direction clap came from. We then stood back up and repeated the exercise. There was a marked improvement. We were able to get 4 claps going around provided I spaced them carefully and we stuck to a one beat clap.

This exercise was brilliant for creating a sense of ensemble and showing our dependence on each other. I wont spend as long but will repeat this exercise over the next few weeks. Might even create a performance piece out of it. Will give other kids a chance to observe and feedback.

2. The oom – pa and oom pa-pa activities from Rites of Spring.

With a different year 3 class we sat in a circle and clapped an oom pa for a girl and an oom -pa -pa. It took quite a while to get right. To help us I chose a child to conduct who walked around the circle pointing to each child in turn to show the rest of the class where we up to. The random order that the kids had sat down in made an interesting pattern. The kids were keen to be a composer and move kids into different patterns. I wasn’t able to introduce a third oop-pa-pa-pa as the children were struggling  but will use this again next week and see if we can move it up a gear.

I had hoped to be able to use this rhythm with our class recorders. However the children round it really difficult.We started doing it by shouting the bigger numbers but the children found it hard to go from shouting to quiet without lots of practise. In the end we concentrated on just getting line 1 & 2 perfect. We did this using lots of body percussion. The children experimented with using stamps, claps, clicks & sounds. After a bit of practise we were able to split into 2 groups with one group marking every pulse and the rhythm group making a loud sound on the big numbers. Groups then had to be prepared to swap at a moments notice. We hastily transferred on to classroom percussion for the chug chug steady pulse whilst a smaller group just played loud sounds on the djembes on the big number. This activity was hugely popular with the kids and I had almost push them out of the room at the end of the lesson as they pleaded one more go, one more go! One the kids have got the rhythm securely I will look at adding recorders with kids choosing notes. I’d like to develop this into a recorder piece that we can play in our concert alongside the more traditional recorder songs we usually play. Wonder if anyone will bring vegetables to throw?
4. Binary form with year 2
I took a box of untuned percussion into my year 2 classrooms today and told the children that they were going to help me create a new piece of music in 2 sections with each section having a different feel. I tipped the instruments onto the floor and asked the class for different criteria on how we could sort the sound. The children had a go at sorting and came up with lots of really valid ways to sort but created endless disagreements! In the end one class chose metal and wooden sounds and the other picked shaky and “banging” sounds. 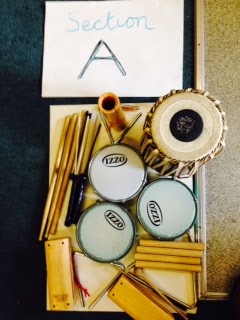 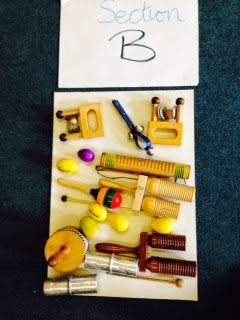 I divided class into 2 sections and each section played a different rhythm that I gave them. The biggest challenge was moving from section A to section B smoothly!
I recorded both pieces for the classes to hear back. The great thing about this was the kids heard for themselves how noisy the shakers were and were spoiling the rests. This is why I am such a fan of recording audio clips. The kids were able to listen, evaluate and modify. I deleted most of the clips as this is a piece in development but I found I had one left on my phone so you can take a listen. Please bear in mind that this clip is intended for the kids to listen to and not a polished performance!

All these activities based on Stravinsky’s Rite of Passage have roused my curiosity. I am looking forward to hearing it played by LSO and I will use it as a starting point for making music in my classrooms. Thanks again LSO I hope that this feedback is helpful.